In honor of promoting sportsmanship in Massachusetts interscholastic athletics. 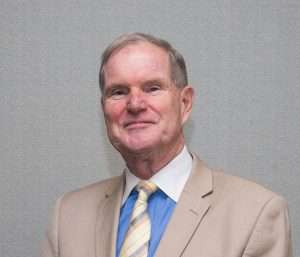 William N. Gaine, Jr. was appointed Assistant Executive Director of the Massachusetts Interscholastic Athletic Association (MIAA) in October 1979. During his 35-year career with the MIAA, Mr. Gaine assumed major responsibilities and leadership in the areas of student eligibility and health/safety of the student-athlete through his role as liaison with the MIAA Wellness Advisory and Sports Medicine Committees, the Massachusetts Medical Society and the Department of Public Health. During his time with the Association, Mr. Gaine held responsibility for all phases of management with most MIAA sponsored sports and most recently with ice hockey, football and baseball.

In addition to these duties, sportsmanship is a specific area where Mr. Gaine dedicated his career. Some of his most significant contributions were developed through his role as liaison for the MIAA Sportsmanship Committee. He worked diligently to uphold the ideals of ethics, integrity, fair play and respect in interscholastic athletics. Through his leadership, the MIAA developed numerous policies, programs, resources and methods of recognition that establish a healthy and positive environment for interscholastic athletic competition and promote the importance of respect for self, teammates, coaches, officials, opponents and the game itself. Statewide programmatic initiatives to which Mr. Gaine has been an architect and catalyst include, Coaching Education, Student-Athlete Citizenship clinics and conferences, New England Student Leadership Conferences, along with MIAA Leadership camps for High School Captains and Community Service. In 2012, these initiatives became identified as the “Pillars” of education based athletics and were organized into the curriculum of Educational Athletics. That same year at Mr. Gaine’s creation and recommendation, a state-wide standing committee on educational athletics was approved by the MIAA Board of Directors.

Mr. Gaine made many sportsmanship related presentations at the local, state and national levels, including the NFHS Annual Meeting and NIAAA Conference. He established partnerships with organizations such as Northeastern University’s Sport in Society, the Anti-Defamation League, the Partnership at Drugfree.org, and several local professional sports teams. He was also instrumental in the development of the Sportsmanship Alliance of Massachusetts (SAM) and the MIAA Partners in Prevention Program.

In honor of his career-long dedication to the promotion of sportsmanship in interscholastic athletics, the MIAA Sportsmanship Committee established an award in Bill Gaine’s name and made a surprise presentation to him as the first award recipient during the 15th Annual MIAA/MSSADA Sportsmanship Summit in 2008.

In July 2013, Mr. Gaine was appointed Executive Director of the MIAA and MSSAA. He held this position until his retirement in August of 2021.

Building the future through
Educational Athletics